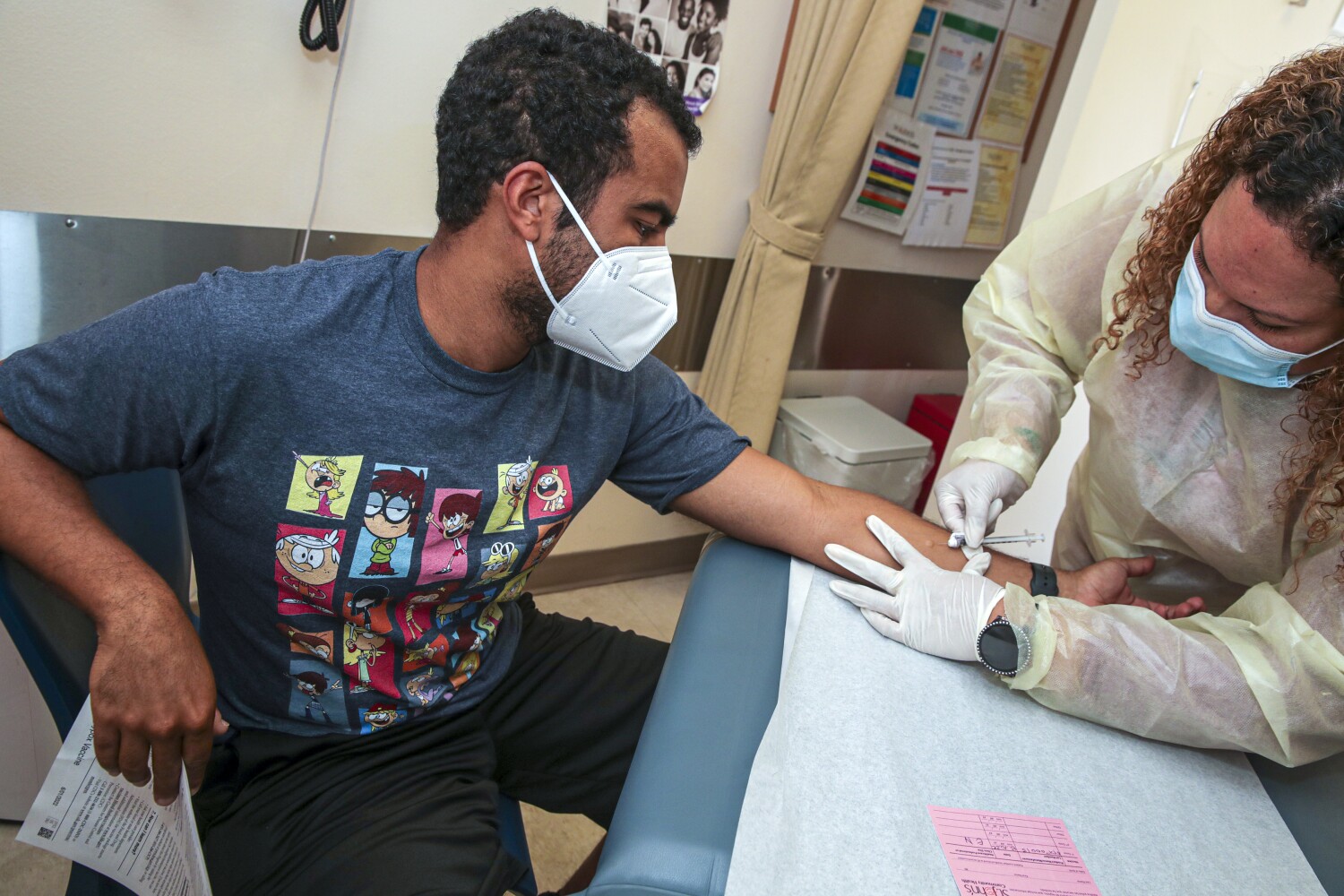 The number of cumulative monkeypox cases has more than doubled in Los Angeles County in the last two weeks as officials race to better track the virus and more widely vaccinate more vulnerable communities.

There had been 1,036 cumulative monkeypox cases countywide as of Thursday, according to data from the Department of Public Health. That total now includes the region’s first reported cases in a jail and in a homeless shelter, health officer Dr. Muntu Davis said.

Just under half of L.A. County’s cases for which geographic information is available have been among residents in a central part of the county that includes West Hollywood, Hollywood, downtown Los Angeles, Eagle Rock, Highland Park and Boyle Heights, while 15% are in a region that includes the San Fernando and Santa Clarita valleys, county health data show. The San Gabriel and Antelope valleys have reported the fewest cases.

The median age of people with confirmed monkeypox cases in L.A. County is 35.

The disease — characterized by a rash and lesions that can look like pimples, bumps or blisters — primarily spreads through prolonged skin-to-skin contact with those lesions, which may be in hard-to-see places on the body or mistaken for other skin issues. The lesions can appear first in the genital area and rectum before spreading to other parts of the body.

“Although cases are increasing in Los Angeles County, the risk of infection in the general population continues to remain very low,” Davis said during a briefing Thursday.

But monkeypox has gained a foothold.

Although the disease can be quite painful, it is rarely fatal. So far, 26 people have been hospitalized in L.A. County, “most of which are due to minor complications from a monkeypox infection or for pain management,” Davis said.

Globally, however, there have been five deaths in the outbreak in countries that haven’t historically reported monkeypox cases. There have been no deaths reported in the U.S.

Wastewater testing, which continues to prove useful in estimating the spread of the coronavirus, is also now being employed to track monkeypox.

In late June — about a month after the first California case was confirmed — monkeypox DNA was detected in wastewater in San Francisco, according to the WastewaterSCAN coalition, a group of scientists who have been testing sewage for the coronavirus since 2020.

See also  Ethiopia civil war: Doctors among those begging for food in Tigray

“It helps understand how widespread this is,” said Stanford civil and environmental engineering professor Alexandria Boehm, one of the lead researchers on the WastewaterSCAN team.

The monkeypox virus has also been detected in L.A. County wastewater. Samples from L.A. County’s Joint Water Pollution Plant in Carson, which serves about 4 million residents and businesses in southern and eastern L.A. County, showed a small presence on July 31 and for three days during the first week in August, according to WastewaterSCAN data. The virus has not been detected there since, despite the rising case rates in the county.

By comparison, monkeypox DNA has been detected almost every day since June 27 at two wastewater facilities in San Francisco — and at much higher levels than in L.A. County.

Because the L.A. wastewater facility serves such a large number of people “you have to think about the sensitivity of detecting monkeypox relative to the incident rate in the population,” Boehm said. “Just because you don’t detect monkeypox, doesn’t mean there’s nobody [in that waste watershed] with monkeypox.”

“It could just represent that the virus is present at concentrations below the level of detection by the available laboratory tests,” she said.

Detection of monkeypox virus in L.A. County’s wastewater hasn’t shown up as quickly as in the San Francisco area, “but I think it’s because we have a very large population relative to the number of cases we have,” Ferrer said. Cumulatively, as of Thursday, L.A. County has 10 monkeypox cases for every 100,000 residents, while San Francisco has 71 monkeypox cases for every 100,000 residents.

It is not immediately clear whether the L.A. County Department of Public Health plans to expand monkeypox testing in wastewater. The county has been monitoring wastewater for the coronavirus for months, including at the Joint Water Pollution Plant, as well as at the Hyperion Water Reclamation Plant in Playa del Rey and facilities near Lancaster and Malibu.

“We do believe this is a useful strategy,” Ferrer said of analyzing the sewage data. “It will take some time to look and assess the correlations between the concentrations and the case counts. … [But] we’re excited to be part of a larger group that’s figuring out how to best use the wastewater data.”

As of last week, L.A. County had received more than 43,000 doses of the Jynneos monkeypox vaccine. Nearly all — 91% — of those have already been administered, with the county offering second doses of the two-shot series for the first time this week. People are eligible for their second shot 28 days after their first dose, and people are considered fully vaccinated two weeks after their second dose.

An additional 29,000 doses have just been received, Davis said Thursday. The latest vaccines will be used in the new method of administering doses intradermally — between layers of the skin — instead of subcutaneously, in which the shot is injected in the fat underneath the skin. The new strategy allows each dose to now be one-fifth the volume of the originally sized doses, thus stretching the limited supplies.

People eligible for the monkeypox vaccine in L.A. County include gay or bisexual men and transgender people who have multiple or anonymous sex partners in the last 14 days. Residents who are immunocompromised, including people with advanced or controlled HIV infection, are being prioritized for the immunization.

Prior data from Africa suggests the Jynneos vaccine is at least 85% effective in preventing monkeypox. Because the vaccine is not 100% effective, health officials still advise taking measures to lessen infection risk. But should infection still occur, “hopefully, it will make the infection less severe,” Davis said.

People who already have had the monkeypox do not need the vaccine because they are already immune to the disease, according to the county Department of Public Health. People who got the first dose of vaccine and were later infected with monkeypox generally don’t need the second dose; however, a second dose may be suggested by a healthcare provider for an infected, partially vaccinated immunocompromised person on a case-by-case basis.

County officials have already begun to make vaccinations available to high-risk people in the county jail system against monkeypox and among homeless people.

Officials have long said the risk of monkeypox exposure is primarily through intimate skin-to-skin contact, and transmission of the virus has not been seen in this outbreak through surfaces at gyms or other public surfaces.

However, in 2018, there was a single documented case of monkeypox transmission in Britain in which a healthcare assistant was infected with monkeypox after changing “presumably contaminated bedding” without wearing a face mask or respirator. The worker had contact with the sheets during a time at which the patient had skin lesions but hadn’t yet been diagnosed with monkeypox and placed under isolation, according to medical journals.

Davis suggested that workers in settings where they’re cleaning surfaces that are touched frequently, such as gym equipment, or laundering bedding, towels and uniforms, take care to implement reasonable general-prevention practices that also protect against COVID-19 and other illnesses.

Workers should wear disposable gloves when cleaning, and workplaces should make handwashing facilities and hand sanitizer available for employees and customers, Davis said.

“We also encourage businesses where workers provide personal care services — such as massages or skin treatment — to consider posting signage asking customers or clients to delay services if they are experiencing symptoms, or if they have new or unexplained rashes, bumps, pustules, blisters or scabs that started as blisters,” he said.

Also recommended is “that workers visually inspect the area of skin that will be touched. And, of course, workers should not under any circumstances touch a rash. Staff should only work on intact skin that has no breaks, blisters, cuts or scabs,” Davis continued.

Residents can request the monkeypox vaccine through their regular healthcare provider or sign up online with the county Department of Public Health to request a vaccination. They can also call the health agency at (833) 540-0473, seven days a week between 8 a.m. and 8:30 p.m.