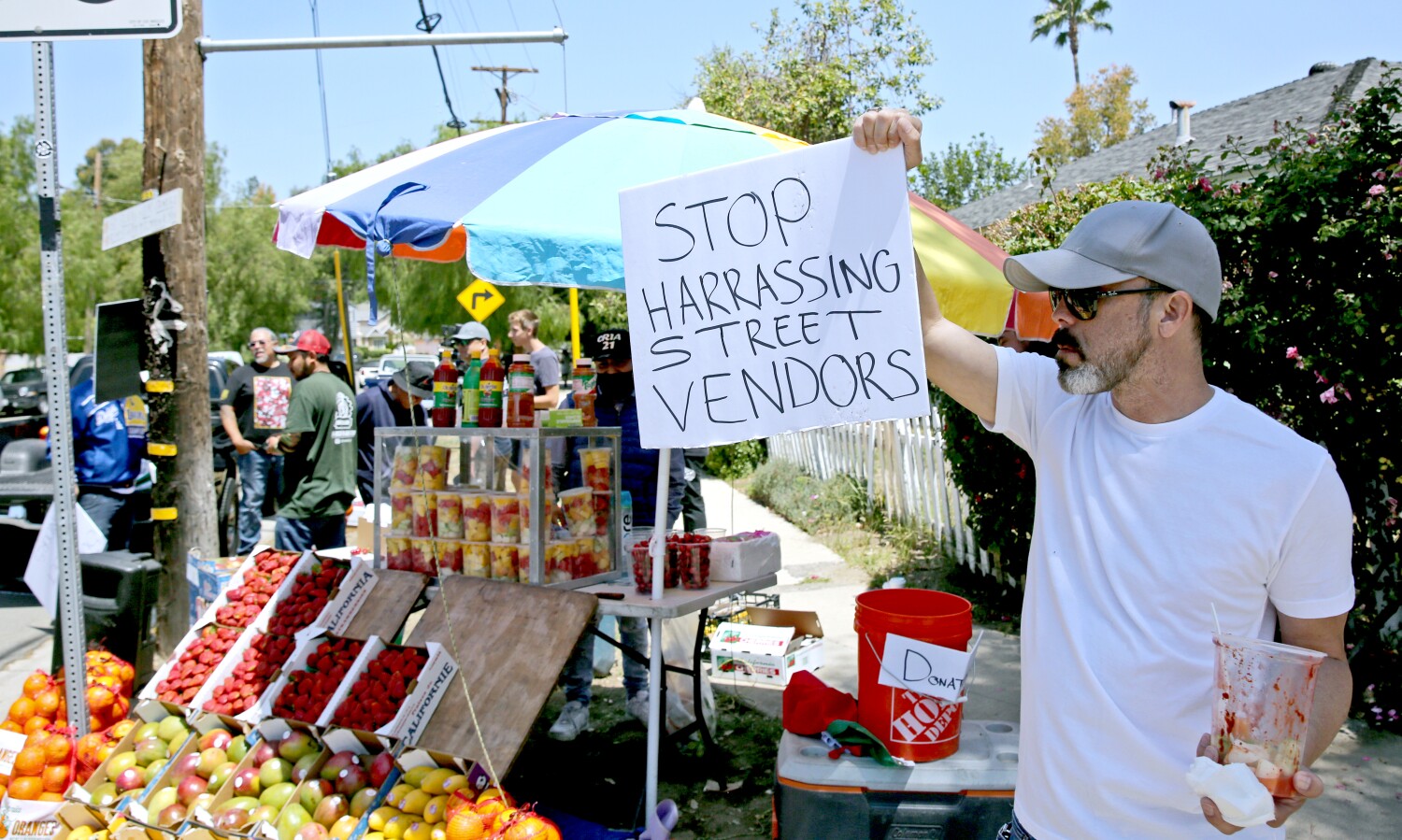 I started off this year writing about food vendors, in the hope that haters might leave them alone as the economy worsens and more people get into it — because, you know, carne asada shouldn’t be a crime.

Sadly, my hopes haven’t been realized.

More and more food vendors are popping up across Southern California — taco trucks, yes, but also people selling Oaxacan tamales from streetside coolers. Fruit sellers peddling strawberries and mangoes from the back of their trucks along with refreshing aguas frescas. Families opening up their houses and backyards for pop-up restaurants. Many with rainbow-colored umbrellas, which are now as much a part of the Southern California landscape as palm trees.

When high-end chefs do all this, they get love from the press and praise from hipsters.

When working class Latinos do it? They get code enforcement called on them — and politicians figuring out how to crack down on street food even further.

San Diego just enacted new regulations that prohibit vendors from selling in certain areas, following the lead of liberal Santa Monica. In my hometown of Anaheim, councilmember Jose Moreno — who fought a lonely fight for years against corruption at City Hall and is the chair of the longtime civil rights group Los Amigos of Orange County — shocked supporters when he asked city staff last week to look into cracking down even further on street vendors, even though Anaheim already has some of the most stringent regulations in Orange County.

After mumbling about supporting those micro-entrepreneurs as “a matter of philosophy and the need for people to make a living,” Moreno — who’s a professor of Chicano and Latino studies at Cal State Long Beach — nevertheless said “when they start setting up right in front of restaurants … that’s an affront to our small-business folks, the neighborhood, the community.”

Let food vendors sell where they may. Get the government out of the way. Support people hustling to make a living, which is far better than sending out stimulus checks willy-nilly.

It was in that spirit that I recently met up with California Assembly Speaker Anthony Rendon (D-Lakewood), whom I’ve kept in touch with ever since he appeared on my 2019 podcast about the 25th anniversary of Proposition 187.

We don’t really talk politics much — our conversations are mostly about literature, but especially restaurants. The man knows his food. Every time we meet, he insists it’s at a new restaurant. We’ve shared meals in Little Saigon, at my wife’s place in Santa Ana and especially in various spots across his southeast Los Angeles County district.

So when Rendon told me he was going to be in O.C. to connect with Assemblymember Tom Daly (D-Anaheim) during the Assembly’s summer break, I told him we should go to two Anaheim spots that illustrate food justice to me.

We first met at Tacos Los Cholos, a taco tent-turned-restaurant where the lines never seem to end and the smell of fire-grilled meats basically wafts down State College Boulevard all the way to Angel Stadium. The lunch rush was just about to start as Rendon ordered tacos of chorizo, pork rib and slightly melted panela cheese with a chile güerito on top. I went with adobada, the northern Mexico version of al pastor.

“My parents didn’t have a lot of money, but they liked to try places,” he said as we waited for our lunch. Family favorites included Tommy’s and a carnitas spot off Indiana Street near the 5 Freeway in East Los Angeles named, appropriately enough, Las Carnitas. But Rendon also loves the spectacle of dining, a trait he got from his grandmother, who was the cook at a retirement home for priests in Silver Lake.

“I once read in a book that people would pay to see Napoleon eat at banquets,” he said as we both dressed our tacos with spicy — but not scorching — red and green salsas. “It just says so much about us.”

The speaker makes it a point of asking assemblymembers when he visits their districts to pick a restaurant where the two can talk shop.

“It’s a reflection of the person, but also of a place,” Rendon said right before biting into his carne asada taco. “It’s a way to figure out both.”

Rendon kept chewing, then tried to continue his point but couldn’t. “Damn, this is really good. Comforting like a backyard BBQ.”

After we scarfed down our lunch, the two of us headed to Tocumbo Ice Cream, which makes the best Mexican-style paletas and ice cream — think a lot of regional fruits like maracuya, mamey and even soursop — in Southern California. Every time I’m in Anaheim to visit my family, I try a new flavor — I think I’m at 24 at this point. Jennifer Clausen-Quiroz and her brother Ricky Quiroz run the place. They also cater and thus know the grind street vendors face.

I asked Rendon how the Assembly has tried to help street vendors in the wake of the pandemic and local municipalities waging war on them. I mentioned Anaheim’s sad example of harassing street vendors and brought up how Tacos Los Cholos — so popular that you frequently see city workers there in uniforms and work badges — graduated from their street-side hustle to now having two locations (sources say a third is in the works).

Rendon told me the state Legislature is trying to get Sacramento out of the way of regulating food vendors. He brought up how Santa Monica State Sen. Ben Allen — a Democrat — tried to pass a bill that would make it easier for cities to go after unlicensed street vendors, but the Assembly successfully tweaked it.

Now, Allen’s bill would require the California Governor’s Office of Business and Economic Development to produce a report on barriers that street vendors face in getting licenses and permits.

“We’re kinder than a lot of cities are,” Rendon said as we ordered our ice cream — Mazapan for me, chongos zamoranos (an ice cream made of cinnamon-flavored curdled milk) for him. “As Dems, we fashion ourselves as champions of the little guy, and [helping street vendors] is the perfect example to help.”

We stopped to enjoy our respective cones. The Mazapan tasted just like its namesake candy, a powdered peanut confection that holds a Proustian power over me. Rendon smiled while finishing his. “This is really layered!” he said. “The subtlety.”

Before we left, I asked Rendon to plug a favorite restaurant in Sacramento and in his district, as well as a wild card.

“323 Tacos for up north — get the asada and lengua,” he said. “Burrito House in Bell, for their chile relleno burrito and handmade flour tortillas. And then that Laotian BBQ spot in Stanton — in that food hall out there …”

Damn, Rendon knows spots in Stanton? California’s democracy is safer than I imagined … and so are its street vendors.